As residents you have an opportunity to give your opinion on the plans. This must be completed by 24 December.

West Northants Council has prepared a plan which shows heavy development in housing in and around the Parish over the next 30 years, this will have a serious impact on life in Shutlanger.

Anyone wishing to view the plans should follow the link below.

The Parish Council will be submitting an objection to the proposals, signed by the Chairman (you can see a copy in the section marked Parish Council Response below) The Parish Council suggest that as many residents, if so inclined, should also submit an objection. The Parish Council has been advised that the number of objections that WNC receives really counts so the more of you who write in the better. Please feel free to use the wording in the chairman's letter below, or write your own letter.

If you do want to use your own wording, we have been advised that practical objections, for example the impact on the road infrastructure, or schools, or doctors' surgeries will have the most impact.

You can see from the following slides the extent of these plans.

If you want to see clearer maps please download the SLAA Appendix 4 - Site Map Book from the consultation home page in the link above and go to page 49. 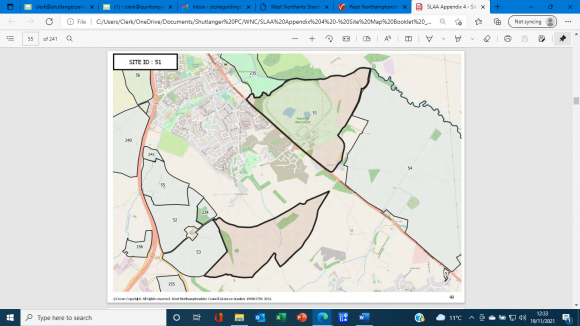 This map highlights two very large areas of development, here given the site 'ID 51'. These two developments are outlined on the map with a heavy black line and coloured in beige. The northern of these areas, numbered 50, in the upper section of the map includes the whole of the racecourse and extends down as far as the River Tove, towards Cappenham Bridge. This area is bounded to the south by Main Road going to the A5.The southern area, not given a number on this map, would effectively see what is now Towcester Grange pushed all of the way out to Cowpastures Lane. You can see this map more clearly by clicking on the second link above.

WNC has identified that 2,000 new homes will be built in area 51. There are further developments planned in a complete ring around Towcester (see the other map below). The ones that will affect us most are area 236 east of Old Northampton Road, running along the Shires, and area 235, north of Reffield Close. Together, the plan envisages for all of the areas on this map a total of 4,250 new homes around Towcester. This is in addition to the 2,750 homes already now being built in Towcester Grange. In total the former district of South Northamptonshire is being expected to take over 15,000 homes, not least the 6,000 planned for north of Old Stratford. Also please note that the area ringed by 236, 237, 238 and 239 is where the new DHL depot is being built.

The impact on Shutlanger and Towcester will be fundamental. There will be a huge increase in traffic heading through the village to both Northampton and Milton Keynes. This traffic will try to join the already overloaded A5 and A508 and attempt to get to the A43 along the Showsley Road. At rush hour we can expect the traffic to tail back to Shutlanger in all directions. Much of the countryside around us will disappear under high density housing built in many places on the flood plain of the Tove. The plan does not say what changes there will be to the infrastructure to cope, for example the road access needed, school place availability and doctors' surgeries, to name a few.

You may also see an area marked "54" this is the field south of Heathencote, although this is not marked for immediate consideration it may be in the future.

The following picture indicates the developments proposed in the wider areas. You can see this map more clearly by opening Appendix 4 as noted above. 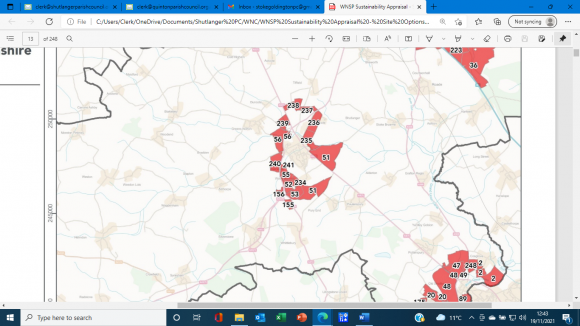 I am writing on behalf of Shutlanger Parish Council to object to your spatial options consultation and in particular areas 51 of site ID 51 at page 49 of appendix 4 of the consultation documents. The consultation earmarks this area for the construction of some 2,000 homes, part of a total of 4,250 around Towcester. These homes are in addition to the 2,750 homes already being built south and west of Towcester. The northern section of area 51 appears to encompass the whole of Towcester racecourse with gate 1 listed structures and adjoin the grade 2 listed landscape north of Easton Neston House.

Together with areas 235 and 236, area 51 will obliterate a significant part of the Easton Neston estate including loss of the amenities at Towcester water meadows. These amenities are enjoyed by residents of Shutlanger as much as residents of Towcester itself. The northern section of area 51 also covers the meadows leading up to Cappenham Bridge. These meadows frequently flood in the autumn, winter, and spring, with many waterfowl staying on this area for prolonged periods. The plans will lead to the entire loss of the small farming communities at Heathencote some members of which have been farming this land for four several generations. They are custodians of the diverse and rich habitat on this land with a wide variety of native mammals and birds, including Buzzard, Red Kite, and owl populations.

The road infrastructure through Shutlanger is totally inadequate to cope with the volumes of traffic that area 51 will generate. The Main Road between Shutlanger and Heathencote is poorly surfaced with very narrow stretches through Shutlanger. Beyond Shutlanger the road meets very restrictive bridges over the Grand Union Canal at Stoke Bruerne or over the old railway line heading into Blisworth. Blisworth itself is already a traffic black spot at the two-way junction of Stoke Road, High Street, and the Northampton Road with a 3-tonne limit on a stretch of Stoke Road alongside the canal. Knock Lane from Blisworth to Roade is a minor country lane with very narrow stretches. Least suitable of all is the Showsley Road, an unadopted single track country lane leading from Shutlanger to the A43 and can be expected to generate significant traffic from people leaving the A43, driving through Shutlanger and into area 51. There is almost no public transport in the area and access on foot to Towcester is at least one hour's walk over country footpaths or along the A5 with very high volumes of traffic and air pollution for pedestrians to endure.

The A5 is already overloaded with commuter traffic heading into Milton Keynes in the morning and seeking to go into, or through, Towcester in the evenings. The A43 bypassing Towcester is at a standstill approaching the Abthorpe and Tove Valley roundabouts every weekday afternoon, and this is before the traffic the giant DHL depot north of Towcester will add. The A508 is similarly overloaded with tailbacks to the Cosgrove junctions during the working week, seeking to converge with the A5 at the Old Stratford junction. People living in area 51 will have no possibility of an acceptable commute by car to the local large population centres, or the rail stations at Northampton and in the Milton Keynes area. Residents of area 51 will be getting into their cars to go to work as there has been no growth in local employment in the Towcester area, with most of the light industry once based there already replaced by housing. The DHL depot is unlikely to generate local employment but instead see shift and zero hours contract workers commuting into Towcester.

The other public amenities in the Towcester area are already overstretched. The sewerage works near Cappenham Bridge routinely discharges raw sewerage into the River Tove as a result of the hundreds of new houses built in Towcester with thousands more already being built. Both GP surgeries in Towcester report being completely overwhelmed by the number of new patients seeking to register there. Neither surgery has space to expand, and we know of no plans for additional GP surgeries to serve the already expanding population of Towcester. Residents of area 51 will be part of this unmet demand. It is a similar picture with schools. Sponne School is oversubscribed, and Elizabeth Woodville school can soon expect to be with the population growth in Roade as well as Grange Park and Wootton.

While there has been an expansion of shopping amenities in Towcester, the large supermarkets are very inaccessible. Tesco and Aldi are on branch roads off the A5 in Towcester with no signal-controlled access. The Waitrose is only accessible through very small suburban roads in Towcester itself complicated by a one-way system.

We understand the need to identify land for housing however the former district of South Northamptonshire led the way in providing such land, as shown in the Grange Park, Wootton, and Towcester Grange developments. This planned transformation of Towcester into a medium sized town is not compatible with the nature of this area and we ask for you to reconsider your spatial options consultation and perhaps a more suitable period would be a 15 year plan, in this way the projected numbers could be re-assessed and a more accurate and meaningful calculation / assessment made.

You can send any objections directly to West Northants Council.